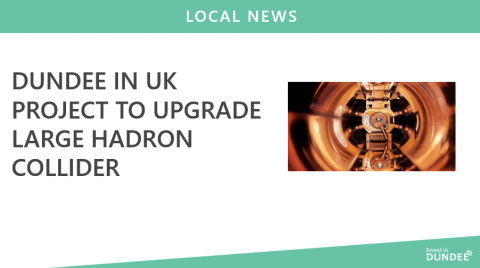 (Attached Image shows the robot developed by the University of Dundee and partners, working inside a 74mm-aperture LHC beam screen. The robot moves autonomously along via inchworm steps while its head turns to perform the laser structuring. Image credit: CERN.)

The University of Dundee is one of nine UK research organisations which have embarked on a £26million project to help upgrade the Large Hadron Collider (LHC) at CERN, on the French/Swiss border near Geneva.

Scientists, engineers and technicians are all involved in the collaboration is between the Science and Technology Facilities Council (STFC), CERN, the Cockcroft Institute, the John Adams Institute, and eight UK Universities [Listed below]. STFC is contributing £13.05m.

CERN’s High Luminosity LHC project (HL-LHC), a large international collaboration, will upgrade the LHC by increasing the number of particle collisions by a factor of 10, allowing physicists to learn more about the properties of the Higgs boson and look for evidence of dark matter.

Phase two of the UK project, called HL-LHC-UK2, is focused on delivering essential hardware to the upgraded collider, with many parts expected to come from UK industry. Essential hardware and project management will be provided by STFC’s Daresbury Laboratory in the Liverpool City Region, in partnership with other project partners and UK industry.

Phase two of the UK project will deliver the final hardware and supporting simulations for the LHC upgrade in five crucial areas. The first phase of the project developed and delivered equipment to allow the World’s first demonstration of highly innovative ‘crab cavities’ that enable the LHC’s particle beams to be angled to increase the opportunity for collisions, along with many other machine upgrades and studies.

The University of Dundee is leading one of the five work packages, on Laser Engineered Surface Structures.

In addition, when an individual electron collides with the beam screen, several more electrons can potentially be released, an effect known as Secondary Electron Emission. This can lead to an avalanche effect in the machine to the point where there is an Electron Halo following the proton beam, colliding into the beam screens and heating them up more and more. This is an issue, especially if scientists want more bunches of protons in HL-LHC, as they risk the potential for even more secondary electrons in the machine and therefore higher heat loads, which has huge implications on cost, with more cooling plant required and high ongoing costs.

Minimising the release of secondary electrons will allow researchers to stick with the cryogenic plant that they currently have for an increase in performance.

Professor Amin Abdolvand, Chair of Functional Materials & Photonics, is leading a team of researchers at the University of Dundee who are using a novel method whereby a laser is used for in-situ precision structuring of the accelerator beam screens to prevent unwanted particles from being released into the Large Hadron Collider, severely impacting its performance upon upgrade to high luminosity.

Professor Abdolvand said, “Our laser technique puts microscopic spikes covered in nanostructures into the surface of the beam screen and this acts to trap electrons that are being generated inside the machine. Together with CERN and a company from Switzerland, we developed a robot that is only 35mm tall and 140mm long, and can drive autonomously inside the LHC’s beam screens during shutdowns to perform the laser structuring process.

“We have proven our technique in the first phase by treating a beam screen for the Super Proton Synchrotron and tested our approach successfully. In phase two we will be treating a number of LHC beam screens, then eventually getting into the machine itself to treat the critical areas.”

Professor Mark Thomson, particle physicist and Executive Chair of STFC, is keen to ensure that the overall project helps to develop the UK’s knowledge economy. He said, “This is a significant undertaking, yet one with fantastic benefits for the UK. The aim is for this project to involve UK industry at every stage, with specialist companies being invited to bid for contracts to manufacture high-tech components for the Large Hadron Collider.”

Professor Rob Appleby, from the University of Manchester and Spokesperson for the HL-LHC-UK2 project, said, “The HL-LHC-UK2 project gives the UK a leading position in high-luminosity collider science and will significantly improve the ability of the Large Hadron Collider to enable new discoveries in the frontier of physics.”

Visible matter (you, what you see around you, and all the stars and planets in space) makes up just 5% of our Universe. The remaining 95% is thought to be dark matter (27%) and dark energy (68%) but physicists have not yet detected either. It is hoped that the increased luminosity of HL-LHC will enable researchers to find clues that could solve the mystery of dark matter.

The lead partner in the collaboration is the University of Manchester. Lancaster University will manage the technical co-ordination of the project.