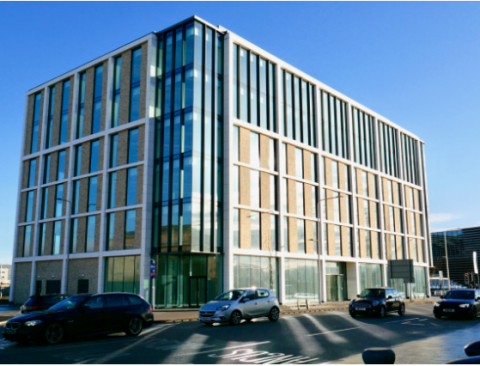 Dundee’s Earl Grey Building is to become the new headquarters for Social Security Scotland after the organisation announced it had signed a 20-year lease on all 58,000 sq ft of office space.

The deal represents the Tayside city's biggest office letting in a decade.

The Earl Grey building sits opposite the V&A Dundee museum on site six of the Central Waterfront regeneration project and was speculatively developed by Dundee City Council.

CoStar had been tipping the deal as likely since the council broke ground on the £14m block shortly after the Scottish Government announced the welfare agency would be headquartered in Dundee nearly three years ago.

The move could see up to 900 civil service jobs eventually based at the site, which will be one of three Dundee offices occupied by the public body. The organisation currently employs around 250 people at its two other Dundee sites and has a presence in all of Scotland's 32 local authority areas.

Fit out is expected to commence in the coming weeks with staff moving into the office in spring 2021, providing Scottish Government coronavirus guidance says it is safe to do so.

Commenting on Social Security Scotland’s growing presence in Dundee, Cabinet Secretary for Social Security Shirley-Anne Somerville said: “I’m pleased to confirm that we have secured premises for our permanent head office in Dundee for our growing new public service. This will create new jobs and boost the local economy, as well as provide a social security system that is accessible and meets the needs of those who use it.

“Social Security Scotland has been operating in the city since the summer of 2018. Securing this space further establishes our presence and investment in Dundee, demonstrating our commitment to the city’s ongoing regeneration.

“I look forward to seeing staff and clients making use of this great new space when it’s ready and Covid-19 guidelines say it’s safe to do so.”

David Wallace, Chief Executive, Social Security Scotland said: “I’m excited that we have secured this site for our Dundee headquarters – a building with this capacity, accessibility and close proximity to transport links is rare.

“This building gives us three sites in the city. Each building is in a central location served by a range of transport options, and great care has been taken to ensure our accommodation is accessible for people with varying abilities. Each Social Security Scotland facility will offer a space where staff and clients feel welcome.

“This is the next big step in establishing Social Security Scotland as a major employer in the city. We’re looking forward to moving in and offering jobs and contracts that will help boost the local economy and further regeneration of this great city.”